What rights do you have, and who is protecting them?

You’ve just done your taxes, and you might have found yourself with a 1099 in hand instead of a W2. You may have a whole lot of questions. If you were already prepared to fill out a Schedule C and had all the accompanying paperwork ready, then that’s fantastic! If you weren’t, then you’re probably very relieved to be done with the hassle. 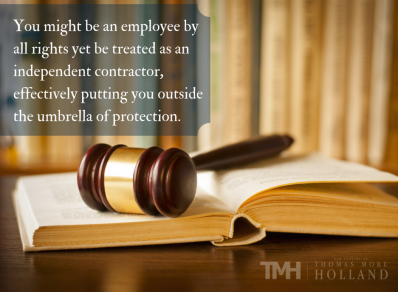 One of the perks of independent contractor laws, however, is that you can deduct expenses when doing your taxes, and that taxes are not taken out of your paycheck directly. Often, as independent contractors have more work-related expenses, that means paying less taxes than the state-mandated ones. Granted, you have less protection, more liability, and higher operating costs, but tax-deductibility is a big perk.

Often, instead of a contract, you’ll find yourself signing a simple independent contractor payment agreement, knowing that a contractor’s rights to payment are protected under the Fair Labor Standards Act.

Where are independent contractor rights most infringed on?

Well, you might be classified by the Department of Labor as an independent contractor, but you might be treated as an employee. This is a great disadvantage to you because you can neither declare expenses or be tax-exempt.

The flip side is that you might be an employee by all rights yet be treated as an independent contractor, effectively putting you outside the umbrella of protection. Cut off from worker’s compensation, unemployment, health care benefits, and paid less than the minimum wage, your employer would be violating multiple federal laws and could be audited by the IRS for dodging their proper share of taxes.

This issue is complicated and can sometimes be unclear. One example of this is Uber drivers. One Uber driver recently won a case proving that she was, in fact, an employee, although Uber is contesting the decision. According to workplacefairness.org, the legal situation often changes from case to case. If you suspect that you don’t have access to all your independent contractor rights, or vice versa, contacting an attorney is the first step you need to take to solve this problem.

There are so many stipulations related to this issue, and the laws are complex. So, please don’t hesitate to contact TMH Law to get the answers you deserve.