Signs Your Office May Be Experiencing Gender Discrimination

As far as society has grown in understanding and acceptance, cases of gender discrimination are still commonly found within the workplace.

Gender discrimination is defined as “treating individuals differently in their employment specifically because an individual is a woman or a man.” In most cases, this discrimination negatively affects women. With that being said, it may not always be as readily identifiable as direct harassment. Here are several cases in which gender discrimination could be playing a role.

Gender discriminating could happen as early as the initial interview process. Suppose your interview goes well, but the employer decides to go with an equally, or less qualified male counterpart due to a male-dominated office/client environment. Or you see your position change at a much slower rate than male co-workers, despite serving as an example to others within the department. 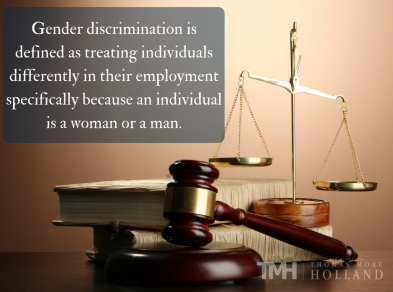 One of the more common signs of discrimination can be found in the pay stub at the end of each week. A recent study showed that full-time female workers in 2015 made 20 percent less than their male counterparts, meaning women made 80 cents for every dollar earned by men. This number is up from 78 cents a few years ago, but nowhere near equal to the amount paid towards a male counterpart.

There have been cases of some positions offering a benefits package that includes medical, but does not include separate coverage for a partner or spouse due to the assumption that they may already have their own. This type of thinking leads to women in the workforce, who may have to take on the burden of additional coverage, to shoulder the extra costs that are otherwise enjoyed in reversed roles.

There are plenty of offices that take their own interpretation of office life, in order to promote values like positive work environments in a more casual setting. That being said, discrimination can often be found heard between cubicles or in break rooms, with discussions that could be deemed inappropriate. And those with management-type positions may see their status as an opportunity to be more of “themselves,” instead of acting more professionally.

Provisions given in federal law, such as Title IX, are designed to prevent these occurrences from happening. If you feel that you have been a victim of gender discrimination within your workplace, please contact us today. We look forward to assisting you.