Mandatory Overtime and How It Affects Health Care Workers 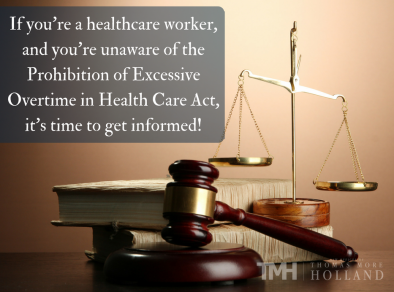 were required to work overtime. The policy also states that an employee would be terminated after the fourth refusal of overtime.  The employee also claims that she informed the hospital that they were in violation of Act 102 or the Prohibition of Excessive Overtime in Health Care Act. However, after her fourth refusal to work mandated overtime the hospital held with their policy and terminated the health care worker. The former employee turned around and filed a suit against her former employer for wrongful termination in violation of Act 102.

Despite the hospital’s policy, the Pennsylvania Superior Court ruled in favor of the healthcare worker awarding her monetary damages and an order to reinstate her former position.

If you’re a healthcare worker, and you’re unaware of the Prohibition of Excessive Overtime in Health Care Act, it’s time to get informed!

What are the laws regarding mandatory overtime in PA?

Generally, an employer can require an employee to work mandatory overtime, and if the employee refuses they can be subject to disciplinary actions or possible termination. In the cases of health care workers, the laws have changed.

In 2009, the Prohibition of Excessive Overtime in Health Care Act took effect. Act 102 prohibits health care facilities from mandating that their employees work more than their regular, agreed upon, or predetermined schedules unless the employee voluntarily accepts the extra hours.

Who is a protected employee under Act 102?

If you’re been retaliated against because you refused to work mandatory overtime, then it’s time to call the Law Offices of Thomas More Holland at (215)592-8080.