Car Accident Claim Lawyer: Determining Who is at Fault and Your Compensation Recovery

If fault is not clear or is shared, this is one of the most opportune moments for you to contract a car accident claim lawyer, as the outcome depends on the legal follow-up process. The fault will thus be apportioned between the two parties and will be determined by the laws governing car accidents in your state. The insurance company also becomes involved at this point because the company will judge the relative percentage of fault of each person in the accident. 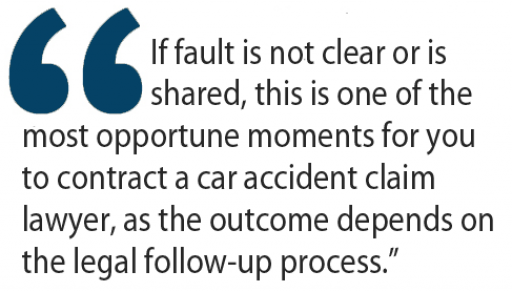 In the past, when two people were involved in a car accident and the person injured was attributed even a small percentage of fault, he or she would lose rights to recover benefits for injury and losses. This type of policy is known legally as pure contributory negligence. Some states currently follow this rule, including Alabama, District of Columbia, Maryland, North Carolina and Virginia.

In other states, the pure comparative fault rule applies. This rule says that when the injured person is at partially fault for his own injury, the damage benefits are reduced by the percentage of fault. For example, if Michael is injured in an accident in which he was 90% at fault and damages for the injury amount to $10,000, Michael can recover $1,000 for his injuries.

Other states adopted the proportional comparative fault rule for cases in which the injured party is more than 51% at fault. Thus, if it is determined that you are more than 51% at fault, you can’t file a lawsuit against the other driver. This rule applies in the following states: Connecticut, Delaware, Hawaii, Illinois, Indiana, Iowa, Massachusetts, Michigan, Minnesota, Montana, Nevada, New Hampshire, New Jersey, Ohio, Oregon, Pennsylvania, South Carolina, Texas, Vermont, Wisconsin and Wyoming.

In the states adopting this rule, any injured person who is at fault by less than 50% compensation benefits for damages. For example, if two people are backing out at the same time and hit each other, they are equally at fault because they both were not looking carefully enough. Since each are 50% at fault, neither would receive compensation benefits. States following the rule include: Arkansas, Colorado, Georgia, Idaho, Kansas, Maine, Nebraska, North Dakota, Oklahoma, Tennessee, Utah and West Virginia.

If you have been in a car accident recently and are looking for a car accident claims lawyer to defend your case, talk to us at TMH Law or learn more about what kinds of auto accident issues we work with here.

How did you successfully win compensation for an accident in which you were partly at fault? Tell us here!