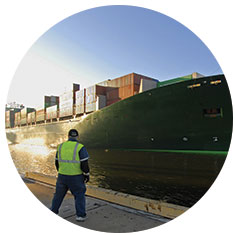 If you, a family member or friend believe you have a longshoreman claim, you need a lawyer who understands the differences between the various laws that affect longshoreman claims, will handle your case aggressively, will fight for you, will keep you informed, and will make sure you get the largest award you deserve. That lawyer is Attorney Thomas More Holland.

What Are the Types of Longshoreman Claims?

Seaman Claims Under the Jones Act

Under the Jones Act, an injured seaman can sue his employer and any other responsible parties for all of his damages, including pain and suffering, past and future wage losses, and medical expenses. A worker is a “seaman” if he is “permanently assigned to a vessel or fleet of vessels in navigation.” The Jones Act applies to individuals who are permanently assigned to a traditional vessel, and to workers on offshore oil rigs and other similar structures.

Claims Under the Longshore Act

The Law Offices of Thomas More Holland is one of the few law firms that represents longshoreman. We know the laws and procedures for these cases, and make sure that our clients receive all of compensation they deserve.

Do I Need A Lawyer?

When Should I Consult An Attorney?

You should consult an attorney as soon as possible so that the attorney can explain your rights. At the Law Offices of Thomas More Holland, we believe that one of the most important services we provide is explaining the law to our clients. Too often, insurance companies and employers do not provide complete or accurate information. It is important to have someone who works for you who will explain your rights.

Attorney Thomas More Holland and his staff give every client personal attention, investigate and analyze the facts of every case, and provide zealous legal representation. Our staff of attorneys and paralegal will help you understand your rights and do everything they can to get you the best possible results. If you, a loved one or a friend has been injured, contact The Law Offices of Thomas More Holland by filling out a simple form, by sending an email or by calling (215) 592-8080.