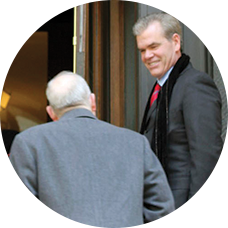 Saint, Knight, Lord Chancellor of England, Author and Martyr, Thomas More was born on February 7, 1478 in London and died on July 6, 1535, when he was executed. More was beatified in 1886 and canonized by the Catholic Church as a saint by Pope Pius XI in 1935. St. Thomas More is the patron saint of all lawyers, judges and statesmen.

The son of Sir John More, a prominent judge, Thomas More went on to study at Oxford, where he wrote comedies and studied Greek and Latin literature. In approximately 1494, Thomas More returned to London to study law. He was admitted to Lincoln’s Inn in 1496, and became a barrister in 1501. While at Lincoln’s Inn, More decided to become a monk and lived at a nearby monastery. More eventually chose to serve his country and left the monastery. He entered Parliament in 1504, and married in either 1504 or 1505.

One of More’s first acts in Parliament was to urge a decrease in a proposed appropriation for King Henry VII. In revenge for this Act, the king imprisoned More’s father and did not release him until he paid a fine and withdrew from public life. In 1509, after the death of the king, More became active once more and was appointed one of two undersheriffs of London. In this capacity, he gained a reputation for being impartial, and a patron to the poor.

In 1511, More’s first wife died during childbirth. More remarried Dame Alice shortly thereafter. It was during this period that More came to the attention of King Henry VIII, for whom he filled many roles. In 1515, for example, he accompanied a delegation to Flanders to resolve disputes about the wool trade. He was also instrumental in quelling a 1517 uprising in London against foreigners. In 1518, More became a member of the Privy Council, and was knighted in 1521.

More also assisted Henry VIII in writing his Defence of the Seven Sacraments, a repudiation of Luther, and wrote an answer to Luther’s reply under a pseudonym. More was made Speaker of the House of Commons in 1523 and Chancellor of the Duchy of Lancaster in 1525. As Speaker, More helped to establish the parliamentary privilege of free speech. Although More refused to endorse King Henry VIII’s plan to divorce Katherine of Aragón in 1527, he still became Lord Chancellor in 1529, and was the first layman to hold the post.

More resigned in 1532, citing ill health, but many believe the reason for his resignation was his disapproval of Henry’s stance toward the church. More also refused to attend the coronation of Anne Boleyn in 1533, and in 1534 was one of the people accused of complicity with Elizabeth Barton, the nun who opposed Henry’s break with Rome. In 1534, More refused to swear to the Act of Succession and the Oath of Supremacy, and was committed to the Tower of London. He was found guilty of treason and was beheaded on July 6, 1535. His final words on the scaffold were: “The King’s good servant, but God’s First.”