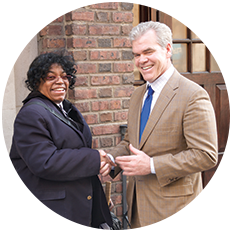 Consider the following examples of our cases:

Thomas Kelly suffered serious brain and head injuries when he was assaulted by a fellow worker. The Law Offices of Thomas More Holland represented Mr. Kelly in both his workers’ compensation claim and in a lawsuit for medical malpractice against Frankford Hospital and others. We settled the medical malpractice case with a confidential settlement. We not only won the workers’ compensation case, but we also pursued an appeal to the Commonwealth Court so that Mr. Kelly’s employer would be held responsible for paying our attorney’s fees instead of having them coming out of Mr. Kelly’s own pocket.

Patricia Cella’s products liability case is an ideal example of the extent to which the Law Offices of Thomas More Holland will fight to make sure that the firm’s clients receive every possible type of compensation. First, at trial, the jury rendered a verdict of $825,000.00 for Ms. Cella. Our office asked the Court to increase the verdict; the trial judge agreed and increased the verdict to $1,375,000.00. The trial judge also assessed “delay damages” of $126,780.25, for a total verdict of $1.501,780.25. We also filed lawsuits in Federal Court on behalf of our client, to assure that we could protect her rights. When the Federal Court dismissed our cases, we appealed. The 3rd Circuit (the Federal appeals court) agreed with our argument

Eunice Rivera alleged that the defendants violated the Americans With Disabilities Act (ADA) and that she was entitled to damages under the Air Carriers Access Act (See, Rivera v. Delta Airlines, Inc., 1997 WL 634500, 11 NDLR P 61 [E.D. Pa. 1997]), and the trial court agreed. The Court agreed with our argument that Federal Law permitted our client to pursue her ADA claim.

The Federal Court ruled that an injured could file a lawsuit against a workers’ compensation carrier alleging that it violated the Americans With Disabilities Act.

In this case, Mary Churchill claimed that her employer had violated the Family and Medical Leave Act (FMLA) when they fired her. A jury agreed and awarded damages to Ms. Churchill – and the Court ordered that our client be reinstated at her job and called that result “a significant victory.” The Court also assessed attorney’s fees against the employer.

At the Law Offices of Thomas More Holland, we pride ourselves on doing everything we can for every client, regardless of how large or small case. Our goal is to make certain that our clients receive every type of compensation – from pain and suffering to wage losses to job reinstatement – to which they are entitled, and we fight for every client.

Attorney Thomas More Holland and his staff give every client personal attention, investigate and analyze the facts of every case, and provide zealous legal representation. If you, a loved one or a friend believe that you have a claim, contact the Law Offices of Thomas More Holland by filling out a simple form, by sending an email or by calling (215) 592-8080.