Is verbally harassing someone considered a form of employment discrimination?

You may feel like you’re being harassed at work, but you’re not sure if the verbal harassment is an actionable offense.

According to the Equal Employment Opportunity Commision, in order for verbal harassment to be considered unlawful it has to be against a protected class under the Civil Rights Act of 1964.

The Civil Rights Act of 1964 prohibits discrimination and harassment based on race, sex (including pregnancy), color, national origin, age (40 and older), disability, and genetic information. The verbal harassment must also be severe enough to create a work environment that is considered hostile, abusive or intimidating.

Handling Verbally Harassing in the Workplace

Verbally harassing an employee or coworker is considered workplace bullying, but you don’t have to put up with it. Verbal harassment can come in forms of threats, offensive jokes, slurs, insults, name calling, and demeaning comments aimed at one of the protected class. 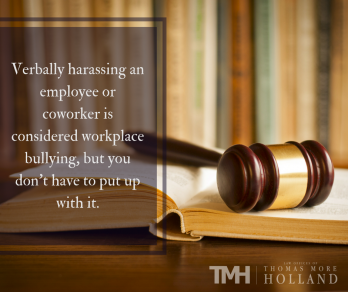 Verbal harassment falls under the hostile work environment prohibited under federal law against a protected class. In order for verbal abuse to cross over into verbal harassment where it violates federal and/or state law, it must last over a long period of time, causing the victim of the harassment to suffer in work performance.

If a coworker or superior has been verbally harassing you over a long period of time and it’s beginning to affect your work performance, here’s what you can do:

If your employer fails to reprimand the abuser, then it’s time to contact the Law Offices of Thomas More Holland and put a stop to being verbally harassed on the job. Call us at (215)592-8080